When they were asked by Ford to design an LCD-based instrument cluster, the SMART DESIGN team suggested a «use of information design and graphic techniques that can reduce visual demand, not increase it».

The result is SmartGauge, an interface that makes clever use of color and contrast to reduce glance time and to makes certain gauges readable with peripheral vision. That way, drivers can keep their eyes on the road while still getting relevant information. SmartGauge was implemented in the 2010 Ford Fusion and Mercury Milan hybrids.

Left: the fuel gauge as it has been represented for the last 100 years. Right: SMART DESIGN’s use of color and contrast.

Initially designed for coaching drivers into saving fuel, SmartGauge received a positive response from the auto industry and the environmental community. BusinessWeek.com, design portal Core77.com and Fast company published articles about the cluster. It was eventually named as a finalist in the 2009 IDEA competition and earned a 2010 Outstanding Achievement honor from the HOW Interactive Design Award. 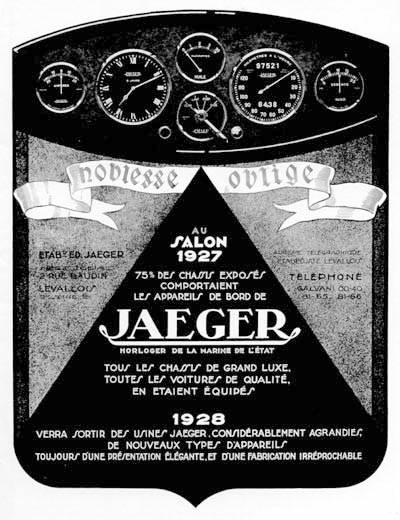 French maker Jaeger, which is connected to current Swiss watch brand Jaeger-LeCoultre, and British maker Smiths are both known for their analog displays used in early motorized vehicles.

As a consequence, similar paradigms were used in horological and automobile displays. To this day, color and contrast are still used sparingly and there is never an emphasis on instant readability such as it may be found in the military and in aviation.

During the watchmaking boom that preceded the Subprime crisis, horological designers have increasingly been using complex and elaborated displays that look very technical but feel anything but optimized for quick glances.

Since Jaeger-LeCoultre was mentioned earlier, here is an example of the maison which readability is anything but instant: The team of SMART DESIGN challenged this tradition of downplaying and over-complicating analog information displays to come up with a concept that meets the efficiency of certain cockpit instruments, which are almost always optimized to provide critical information at a quick glance.

SmartGauge is a very good attempt at thinking out of the box, and it opens new possibilities in analog displays that Independent Watch Makers could take heed of.