REQ: a watch that actually feeds off magnetic fields

Magnetic fields are often a headache for watchmakers: they can seriously disrupt the normal running of a watch; and iron-free spring alloys are difficult and expensive to use. The solution which seems most in favor consists in constructing watch cases like magnetic Farraday cages (see our page on antimagnetism).

The vulnerabillity of watches to magnetic fields could actually be turned into an advantage… at least this what the idea of engineers at RICOH Elemex corporation when they started working on a quartz mechanism that could be charged through induction. The movement-making arm of the RICOH company eventually unveiled a collection of watches that can be easily recharged through a docking station. One night by the bedside table will keep the watch running for three months.

There are many benefits to this novelty technology:

Miniaturization has allowed to add many features to quartz watches: chronograph, loud speakers, artificial light or vibrating motors can help make better time devices. The main problem with such features is that they dry the batteries faster.

This technology also comes with fool-proof features: like most modern battery-powered quartz watches, RICOH’s REQ shows when the battery starts running low. Two LEDs at 6 o’clock show the charging status and once it is fully charged, the watch no longer need a magnetic field and automatically prevents overcharging.
For these reasons, RICOH’s Rechargeable Electromagnetic Quartz comes quite handy: water-resistance can be optimized through less case parts, power-draining features can be added, and the customer needs less frequents visits to a specialist to keep the device running. One could imagine super-waterproof watches relying upon this system. 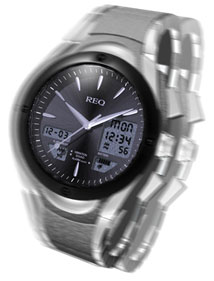 One Response to REQ: a watch that actually feeds off magnetic fields