The British Formula 1 Grand Prix will be held at Silverstone for the next 17 years. To mark the FIA endorsement of the “Home of British Motor Racing”, the team of Christopher Ward is launching an automatic watch named after one of the most demanding sets of corners of the Silverstone racing track: the Becketts. Unveiled last week, the Christopher Ward C90 Beckett is a 43 mm watch inspired by vintage racing cars… dare I say inspired in particular by their chrome-plated dashboards. As in their retro-inspired diver’s watch (presented on this blog amongst others), the designers of Christopher Ward have cleverly taken cues from vintage car displays and vintage timing devices to create something that is both contemporary and retro. 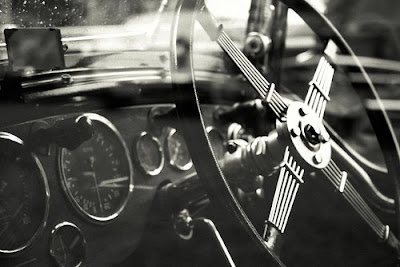 The new collection by Christopher Ward is one of the new timepieces under GBP 700 to be motorized by the ETA Valgrange A07.161, a recent development of Swiss Watchmaking leader Swatch Group. It is an oversize calibre based on the rugged and reliable Valjoux 7750, which saw the chronographic functions removed and the main plate diameter increased from some 30 mm to some 37 mm in order to drastically increase the winding weight in the process. Built in the Granges ETA factory in Switzerland, the result is a high-torque and fast-winding calibre that benefits from the Valjoux 7750 architecture. The Valgrange base lends itself to modifications such as this power-reserve indicator; but there are other examples of its possibilities such as the tourbillon and “striking seconds” added by German Master-watchmaker Richard Harbing to his own watches. All of this confirms that the Valgrange is a very nice calibre to use in an “oversize” watch… if we count anything beyond 42 mm of diameter as “oversize”.

The Valgrange calibre line is slightly more expensive than the other ETA mechanical movements, which demonstrates once again that Christopher Ward does not cut corners when it comes to quality.

Tourbillon
Watch with the escapement housed in a cage that completes a revolution in a fixed amount of minutes.
master-watchmaker
Watchmaker capable of performing the tasks of designing, machinging, finishing assembling and controling of mechanical movements.