PMWF forumer Ricky Lee McBroom, a long-time fan of Trintec watches, kindly informed me about his latest review of a new timepiece by the founder of Trintec Industries Inc. Brendon Nunes. The company has begun rolling out new models, some of which I wrote about earlier. Following my pleasant correspondence with Mr. Brendon Nunes, the aviator and inventor agreed to an interview that will be published on WatchProjects.com.

Born in Trinidad Tobago from parents of mixed European roots, Brendon Nunes arrived in Canada at the age of 14. He followed pilot training with the intent to pursue a career in commercial aviation, but the sudden popularity of a cockpit-inspired clock he designed in 1984 prompted him to establish Trintec Industries Inc.

In 1986, Brendon Nunes purchased his first aircraft, a Bellanca Citabria, which was a fully aerobatic airplane. At the time, the young entrepreneur was a member of the York Soaring Association and was a tow pilot flying a Piper Super Cub to bring gliders to altitude. At Trintec, he decided to set up an in-house development team that would eventually patent more than 45 inventions. In his own words, Mr. Nunes and his co-workers have always tried to «create unique designs that do not infringe on the rights of others». Amongst these are mechanisms and case designs destined for precision barometers and nautical instruments.

Brendon Nunes has been flying many types of aircrafts; and in all of them the layout and function of cockpit displays controls are designed to increase pilot situation awareness without causing information overload. In 1990, the entrepreneur became one of the first instruments manufacturers of the post-Quartz Crisis to adapt the paradigm of aviator instruments to the wrist. For the first  and second series of dials, he drew inspiration from instruments features in the T arrangement.

Mr. Nunes had in mind to use a movement that would display Coordinated Universal Time (commonly called ZULU time by military and commercial aviators). Unfortunately, at the time, most watch making companies were not selling to third parties; and those that did had a limited range of movements to choose from. To darken the watch case, Brendon Nunes thought of using acid-proof carbide-based Physical Vapor Deposition, a process that was used in aeronautics at the time; but the technology was rather expensive and it was still experimental in the field of wrist watches. The most widespread solution then were black chrome galvanizing and anodizing, two surface treatments that created a layer that could still wear off sharp edges and slowly be removed by the acid pH of human sweat.

The first Trintec watch came out in 1990 with a dial inspired by altimeters. It used an alloy cases rendered black and matt thanks to a powder coating. The collection met with success amongst aviators enthusiasts, and other dials inspired by attitude and heading indicators followed in 1993. 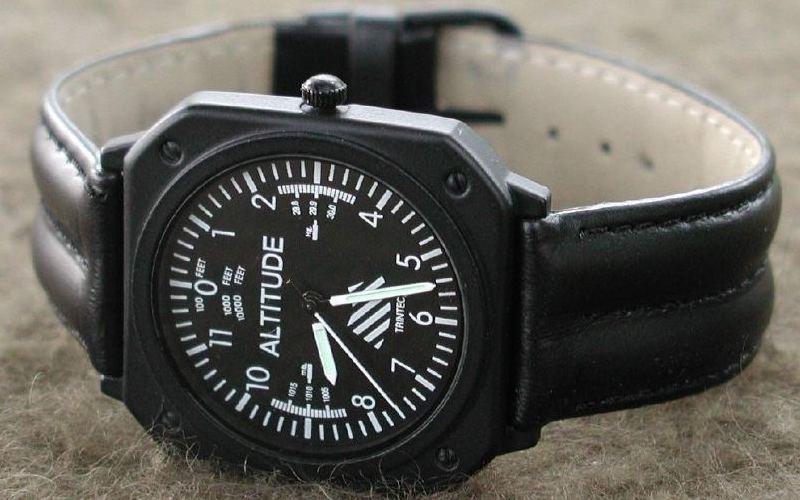 With his wife, Brendan Nunes runs a family of 8, and he loves to shares his passion for aviation. In 1997, he co-founded with two peers the Toronto Aerospace Museum, which would be renamed the Canadian Air and Space Museum 10 years later by the new board of directors. He also became an active shareholder in an Executive Air Charter company that initially operated 3 aircrafts: a Piper Navaho, a Cessna 340 and a Beach Craft King Air 200.

In 2000, Brendon Nunes and his co-worker Gregory Lowe-Wylde patented a new casing for nautical instruments that could be submerged to a depth of more than 30 meters (100 ft for non-SI readers). Trintec Industries can boast about manufacturing and selling products based on their own Intellectual Property; and having supplied partners and professionals with clocks, barometers, thermometers and tide clocks for the last 20 years. By then, the Swiss watch making industry had recovered from the Quartz Crisis aftermath. Ronda AG, the second Swiss movement maker, released a variation of its 515 quartz calibre with a 24 hour hands. Case makers were also better equipped to apply PVD coating, so the aviator and instrument inventor decided to develop a new series of round wrist watches. «Designed by aviators for aviators», as Mr. Nunes likes to say, the round ZULU-01 collection took advantage of the Ronda calibre with 24 hour hand and a rotating bezel to help pilots keep track of the Coordinated Universal Time.

Encouraged by the success of the ZULU-01 line amongst his aviatior peers, Brendon Nunes decided to go back to the drawing board and upgrade his original design from 1990. This time, he had a long list of quality case makers to choose from, and the PVD coating he had originally envisioned on his watches in 1989 was now a tried and proven technology. In the process, the round ZULU case received a quartz chronograph, and Mr. Nunes eventually came up with two case designs based on the 1990 Aviator. One would be used for the ZULU-03 series, and the other would be use for a new trade mark (IDENT) and sold exclusively on eBay (this is the watch reviewed by Ricky Lee McBroom).

Below is a photography of three generations of watches by Trintec Instruments: two original alarm clocks from the early 1990’s, two versions of the original Aviator watch from 1993; and a model from the new ZULU-03 Vintage series. As always, the various dials draw inspiration from 3 of the 4 instruments featured in the classic T arrangement. Brendon Nunes was kind enough to update me with pictures of the new automatic ZULU-03 Vintage series. Measuring 42 mm by 42 mm and with 13 mm of thickness, this collection features 316L stainless steel cases that have received a satin surface with rounded edges. The case, screws and crown all undergo a Physical Vapor Deposition process that increases their resistance to mechanical and chemical aggressions. A sturdy and reliable Miyota 8215 calibre designed by Citizen is mounted with a dial and hands with luminescent coating. The silicon strap is impervious to water and wear, and comes with a PVD-coated steel buckle. One Response to Trintec, Maker of Aviator Instrument Watches since 1990