I have already introduced the Swiss Made brand Steinhard on several occasions. This German-based watch company is worthy of interest on many counts: all their watches feature Swiss movements and are assembled in the Swiss Jura mountains. Steinhard watches mostly sells through Direct Marketing, which allows them to cut the middleman and offer very reasonable prices.

The latest installment from this young confidential brand is the Nav.B-Chronno II Black DLC, which could be included in my list of XXI Flieger chronographs. The new model is an iteration of their already-existing Nav B-Chrono II, which received a special Diamond-Like Carbon coating and a crown shaped like a Spinning Top. Watchmakers have been experimenting with surface blackening since the 1970’s: black chrome plating was one of the earliest solutions, but the added layer would slowly be bitten off by th acidity of the skin. There were attempts to use powder coatings, but those would easily chip off. Polytetrafluoroethylene, also known under the trademark Teflon, was experimented with on Military Watches, but it scratches off very easily.

Throughout the 1990’s, brands like Longines borrowed the Titanium Carbide coating from tools manufacturers to apply it to watches. The process helps to harden the surface, but it can still be scratched relatively easily and it is impossible to restore. The first decade of the XXIst century saw drastic improvements in Physical Vapour Deposition, which helped spread the technology. Almost every watch company now relies upon PVD coatings to change the surface colour of their stainless steel: yellow, pink, grey or black.

The latest cutting-edge in surface finish is something called Diamond-Like Carbon. As in the case of Titanium Carbide, the technology comes from tool manufacturing processes. A thin layer of the compound can make the surface of a drill or a blade almost as hard as diamond. The process was introduce on high-end watches, but it eventually percolated to entry-price watches from Seiko and Citizen.

In terms of looks, the Steinhart designers have opted for an “aged” colour palette, a trend that was tastefully implemented earlier this year by Bell & Ross chief designer: The DLC Steinhard chronograph is sold at EUR 820, just EUR 40 more than the basic steel version. 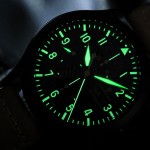 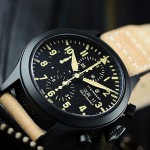 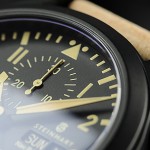 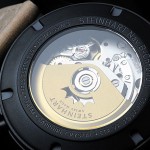 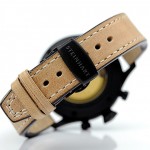 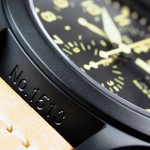 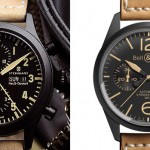 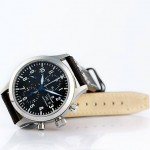 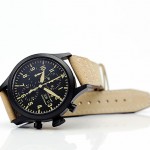